The plasma with an operation temperature of about 100 million degrees, is confined in the “magnetic cage“ in order to avoid contact with the wall of the vacuum vessel. Because of the plasma pressure of up to 1 MPa (10 bar) magnetic fields of about 5 Tesla are necessary in the plasma centre, which in turn requires magnetic fields of 11-13 Tesla at the coils which will be superconducting to limit losses.

Since the seventies, the development and testing of superconducting magnets has been of high importance at KIT, starting with the pre-test of the so-called LCT (Large Coil Task) coil, followed by the successful tests of the poloidal field model coil and the prototype coil for the stellerator experimental facility Wendelstein 7X. For the testing of the ITER toroidal field model coil (TFMC) a test bed was developed and installed aimed at simulating ITER-typical loads. Together with the LCT coil, the TFMC is fixed in a frame which simulates the force of neighbouring coils in a reactor. Two cryogenic facilities with an equivalent power of 2 kW and 0.5 kW respectively at 4.4 K constitute the cryogenic basic supply. Supercritical helium at 4.4 K is pumped through the conductor and the housing of the test coils. Electrical power is supplied by low-voltage, high-current power supplies with up to 80 kA current. The tests were very successful and the worldwide highest current of 80 kA in a superconducting coil was achieved without any problems. The triggering of fast discharges and the investigations of the stability of the superconductivity with heat pulses induced into the helium coolant confirmed the theoretical calculations. On the basis of these results, the technology for manufacturing and operating superconducting magnets suitable for ITER has been demonstrated. 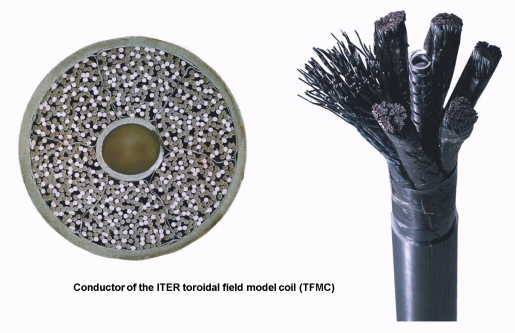 The above-described tests were complemented by investigations of current leads for superconducting coils which were focused on the dependence of critical currents on magnetic fields and mechanical strain of Nb3Sn-ITER sub-cables. The figure depicts the conductor of the ITER model coil composed of more than 1000 multi-stage cabled Nb3Sn standard strands (~ 0.8 mm diameter), distributed on six isolated sub-bundles, cabled around a central tube (serving as helium flow channel) and packed into a helium-tight steel jacket (40 mm diameter).

Another major activity is the development of current leads for up to 80 kA aimed at the supply of the ITER superconducting coils, also performing the transition from room temperature to 4.4 K. Apart from the conventional types (made of copper) which are necessary for the coil testing facility (TOSKA), high-temperature superconducting leads (HTSL) have been tested successfully.